Threads are going to break the Hive Blockchain

I mean, not in the literal way, of course.

One of the best parts of the Hive Blockchain is how strong our chain is and how trustworthy our witnesses are, in fact if I had to put all my bags in one chain and trust the devs with it in terms of money safety, I would pick this chain.

One of the main topics of conversation I have with much more technical Hivers than me, is potential for scalability, particularly the Hive blockchain's scalability.

I'm not gonna get technical on you, I don't even dominate this topic so why would I go deep into something I am not an expert, but what I can tell you in normie terms is, right now the block size one of our witnesses produces every 3 seconds is not huge, in fact it is little, but since every piece of data is stored as text, the block produced is never full, and since there's a new block every 3 seconds, we don't really have a problem in terms of users and transaction - even with splinterlands' in-game transactions.

I have no idea, perhaps it takes 10,000 times the current amount of transactions to fill a block, as I said I have little knowledge about the technical details of this, I just know the theory, the part that is easy to understand for normies like you and me.

The thing is, once the block size is full and more and more people want transactions to go through, resource credits will start to get more expensive and thus, your RC will get depleted faster. Right now I have 20k Hive Power and there is no way I get to ever reach less than 90% of RC, even when I go on comment sprees. But if engaging on Hive suddenly made my RCs deplete faster, and I wanted to keep interacting more on-chain, I would have to do one of two things: Either way until I have enough RCs, or buy more Hive and power it up in order to have more RCs.

So, why are Threads going to break the Hive Blockchain?

Well, for starters, let me explain you what #threads are.

Imagine Twitter but on steroids. Picture being able to start a #thread about the fundamentals of the Hive Blockchain. On Twitter you would either get shadowbanned or get your account suspended for having the wrong speech. If you started a #thread about how the Federal Reserve is fucking up the US's economy, perhaps you would get those tweets deleted or you would have your account disabled until you delete those tweets.

On the newest Leo Finance feature called Threads, you can't get your content deleted because it's engrave on the Hive Blockchain; nobody can ban you for saying the wrong things or shadowban you because you don't like certain topics. Everything you say will have a voice - perhaps not an audience, but your voice won't be silenced.

With Threads there's no issue regarding block production. Right now on Hive you can't post more than once every 5 minutes, and you can't comment or vote twice in less than three seconds. 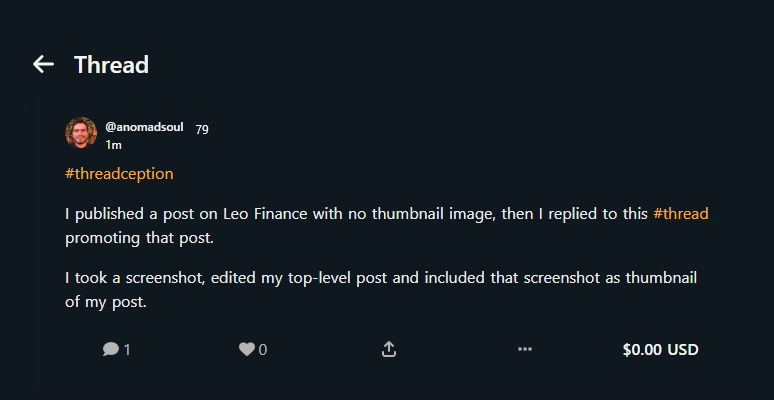 This image is from the test drive I'm currently doing on #threads. Tomorrow this feature goes live. It looks pretty good huh? 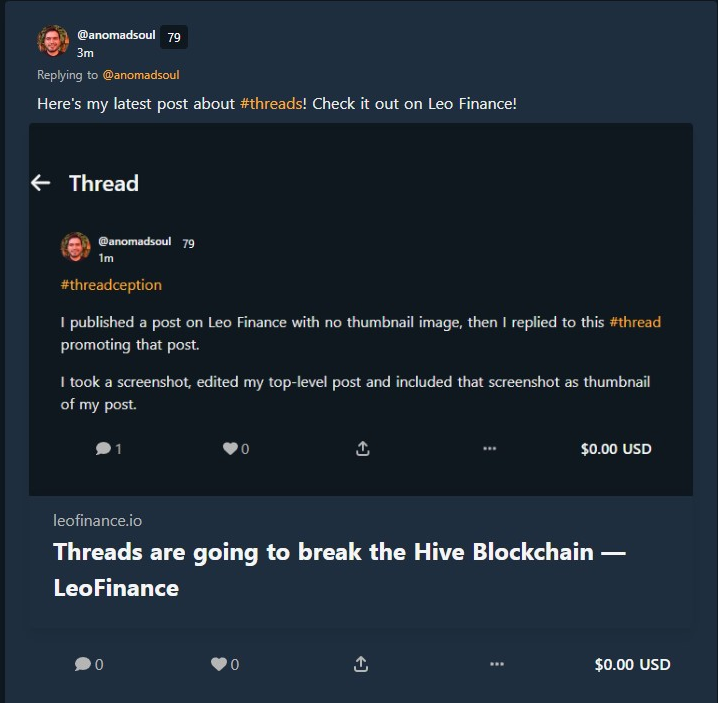 With Threads, and thanks to the Leo's lightning network, you can actually post as many threads as you can in as little time as possible, and you can vote as much frequent as you want without having to worry about block size or account limits - the only limit is the amount of Resource credits you control. But you can just buy more Hive, power it up, and you're good to go.

As you can see, #threads is a great use case for resource credits and if enough people engage daily on this Leo feature, it is a good sign for the price of Hive.

There are NO autovotes on #Threads

That's right. As long as you post something related to money or with a money mindset, you can post as many top level threads as you are able to, because these threads won't trigger the automatic votes from your most loyal followers. Yep, this means there will be no reward police coming for your ass for having a $30 dollar post for a 150 character thread.

That's huge in my opinion, especially because some times you just want to vomit your thoughts and you don't want to get rewards for it, and just start a conversation about a certain topic without coming out as a reward pool abuser.

And this, in turn, will increase the price of $LEO because the revenue from $threads will be used to buyback $LEO.

You heard it right. Unlike Twitter or Instagram, Leo Finance will not use this ad revenue to fill the CEO's pockets, this money will go towards the users who hold Leo tokens in their wallet.

This is as decentralized as it gets, man. For the first time, as far as I know, a platform will share the ad revenue with their stakeholders!

What is even better is that #threads will work with markdown just as posting on Hive works. That means you can write in bold, cursive, include a huge title, set a list of items, etc and of course adding pictures and videos... Not like what happens on bland and plain Twitter where you can only write in a normal way, include pics and embed vids, and that's it.

On thing to consider: You can't edit your #threads, at least not from the thread interface, if you publish it, it will stay there forever, nobody can take it down!

Tomorrow is the launch of #Threads

Who knows, all I know is that I am more than fucking ready to get make the most out of this new Leo Finance feature, and if you don't even try it, well then, you are hopeless :P

But remember the difference is that they publish 'tweets' as top level Hive posts.

Meaning that they get caught up in people's autovoters and then the Hive elite downvote the shit out of it due to perceived low quality.

Threads from LeoFinance publishes 'tweets' as comments and as such, they avoid autovoters and all the Hive politics bullshit that comes along with those rewards.

I'm keen to see how the wider Hive community perceives and uses them :)

All I can think is forums, but with rewards, we shall see what impact they have, as is I'm pretty clueless as to it, this being the only thing I read about it.

It will be too hard to find hidden gems among thousands of #threads tomorrow. Let's see who can beat TaskMaster on threads (though nearly impossible)

Cool. I will follow your threads and see where they go. Then I will try not being hopeless.

So threads will actually be our comments! Threads will be a new frontend on Hive? or a community or something like twitter?

Question, questions.. Will wait and enjoy this new Leo milestone.

One of the thing I love about the thread is that it avoids auto upvotes which makes a lot of sense. Let's thread tomorrow

hhhmmm . . . I like that Twitter on steroids and buying LEO from the threads' ad revenues. Yes, that's a great way to share the revenue with stakeholders.

The team is putting best efforts and yes the whole community has seen them...

Please I'm very new to the #thread, can you please explain it to me in the simplest way you can 🙏, I think it's something I can try but I don't understand it well.

I can't find any links please share it with me here.

Yay! 🤗
Your content has been boosted with Ecency Points, by @rmach.
Use Ecency daily to boost your growth on platform!