Few Crypto Millionaires Probably "Do This". It Would Literally Be Life Changing If They Did It

I had a post today about Bitcoin's quite dull price performance lately and why I'm fine with that and also why most of the crypto heads should be fine as well with the situation. In that one, I also pointed towards the fact that Bitcoin is doing terribly good when comparing it with how the society is currently working...

@joanstewart had an interesting comment to the post and it made me think of something regarding these crypto gurus I was mentioning about, and the crypto community as a whole. Here's the comment: 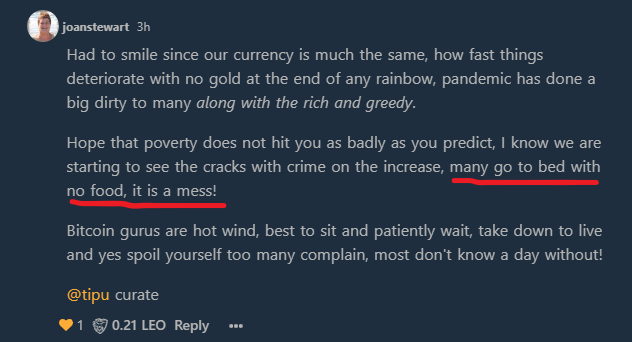 I don't know how many of you are aware, but there are indeed people around the world that are really starving at this point. I bet that there are probably thousands of individuals that are going to bed with an empty stomach right now, some probably having to schedule their resources based on days and not meals, as @taskmaster4450 was mentioning in his video the other day.

Meanwhile some pussy "meme accounts" are bitching about Bitcoin not "fulfilling their plans" and not performing accordingly. These individuals don't have to worry about covering basic needs and I have nothing against that. I'm not a hater, it's their right to be wealthy and happy, but please...

One thing that I was thinking while reading the comment of Joan was how many of these crypto millionaires are donating any money to feed the poor. Is Michael Saylor, or Max Keiser... or Elon doing that? I don't know... and honestly I don't know if these crypto heads I'm mentioning about are doing it too...

On the other hand crypto is about building communities, empowering individuals, "fixing the system" and making people financially independent.

Are we missing that? To some extent yes... One of the few projects that empower humans across the globe is Hive, hands down. This project is not only a wealth creator, but a "life boat" too. If I wasn't active on Hive and my content being curated by you guys, I'd be in deep shit right now, I tell you for sure.

HIVE has appreciated a lot lately and not only that upvotes weigh more, but the revenues are bigger. I am not making tons of money and probably never will, but Hive has been a blessing for me. I have never been poor, like dirt poor, but I had my years of struggle, thus I know how to appreciate "the good" when I see it.

There's an "almost homeless old man" in my town, I know him for years, he's a nice man with a good soul, always says hi and in for a small conversation, but the man has basically no income and he has some mental problems as well, suicidal stuff. Since I am earning a pretty decent income for my country I promised myself to always pay for his food whenever I see him in the supermarket.

He doesn't buy much, something like $10-$20 in groceries... Quite cheap food and some sweets, it's not much really, thus I don't feel like I'm making big efforts to pay for this man's food. I sometimes earn that amount on a post, so why not... It would be nice if these crypto millionaires would do pretty much the same.

They'd have the resources to help even more people, but on a grand scale. Don't know how many of them do that, but it would be life changing for so many people that are actually going to bed on an empty stomach. It hurts just thinking about that... It's in our hands as individuals to help others when we can and I see crypto as a great tool that can be used in that regard.

Thanks for attention,
Adrian